With the billionaire-led space race now in full swing, we as a species are at the cusp of a new era in space exploration. Human missions to the Moon, Mars and Venus are closer and closer within reach with each passing year. Within our lifetimes, human voyages to these celestial bodies will become commonplace.

If you look at the recent history of human voyages into unknown lands, we see that whenever their ships sailed, there were scientists on board. With the science they conducted, we attained a broader understanding of the geography, astronomy and botany of these newly charted lands. We traversed vast oceans - the deep blue - and were rewarded with the discovery of new lifeforms and ecosystems. And now, the thirst for exploration is leading us to traverse the vast cosmic ocean of outer space - the deep black - in search of new lands and, perhaps, new life.

There is a profound question that keeps me up at night:

Are we alone in the universe?

That question doesn’t have an answer, but it’s not for lack of trying. We’ve built telescopes that can sense any signal in the electromagnetic spectrum, from chonky radio waves all the way up to energetic gamma rays. We have the SETI (search for extraterrestrial life) project, which expends unfathomable computational power toward the goal of finding intelligent life out there in the deep black. And now we’ve dipped our toes into even more novel forms of measuring reality, like gravitational wave detectors and giant neutrino observatories. We’ve built so many ways to see, yet all our eyes have found no one.

What if there are no aliens out there? Worse yet, what if they’re right here, and we can’t even know it?

Think about it: your body contains more bacterial cells than it does mammalian cells, and for most of history we had absolutely no idea! The soil in the world’s forests is brimming with underground mycelial networks that exchange nutrients between the plants and trees, and we didn’t even know about these fungi’s crucial role in the ecosystem till 1997! And let’s not even get started talking about all that’s yet to be found in the deep blue ocean.

This is all to say that it’s really hard to detect other lifeforms, even when they’re right under — or inside! — our noses. To add insult to injury, all the lifeforms I mentioned above are fellow Earthlings. What hope do we have of detecting extraterrestrials?

Using our narrow perspective on the universe, we are only able to imagine life that resembles what we see around us — animals, plants, bacteria and fungi. Yet it is unlikely that aliens would have a similar biology to ours. They might be built with different building blocks than cells and DNA. They might even be forged from Silicon or some other foundational element than the Carbon we’re built from. But the thought that fascinates me the most is: they might be constructed from entirely different kinds of fundamental particles than we are.

In the standard model of fundamental particles (we’ll get back to aliens soon, I promise), there are 17 types of particles, of which 3 are neutrinos. What are neutrinos, you ask? I think Wikipedia explains it best:

The neutrino is so named because it is electrically neutral and because its rest mass is so small that it was long thought to be zero. The weak force has a very short range, the gravitational interaction is extremely weak, and neutrinos do not participate in the strong interaction. Thus, neutrinos typically pass through normal matter unimpeded and undetected.

Neutrinos are notoriously hard to detect. 100 trillion of them pass through our bodies every second, and yet virtually none of them will interact or collide with the particles you are made of. In our everyday experience, they might as well not exist. So how is it that we know about them?

You see that Alex Grey-/Van Gogh-esque image just above? It’s not a painting; it’s a photo of the Super-Kamiokande detector deep underground in a zinc mine in Japan. Its main purpose is to use its 13,000 blue-light sensors and 50,000 tons of water to detect neutrinos. With a mad-science setup like that, you’d think that it detects a large number of neutrinos all the time (remember: there’s 100 trillion of them passing through your body each second). The truth is that it detected a paltry ~25 per day…an impressive feat, but it goes to show just how elusive neutrinos are.

What if aliens are made of neutrinos?

We wouldn’t be able to detect their world, but would they be able to peek into ours?

With our current technology, trying to understand the alien neutrino world would be like trying to reconstruct the earth from a bucket of air. On the other side, if the aliens have more advanced technology and can detect 'ordinary' matter, they could be watching us. I hope they think we’re cool! (Probably not). The other possibility is that they’re as clueless about us as we are about them, and they may ignorantly think the whole universe is made of neutrinos, just like our view of the cosmos is biased by our atom-tinted glasses.

They would be everywhere.

The neutrino-aliens would be here, there, everywhere - undetectable - inside us, in the ocean, in volcanoes, in the clouds and in your bowl of spicy noodles. If there are trillions of these particles passing through us all the time, their entire world exists in a kind of parallel reality with ours, simultaneously taking up the same space while not interfering with each other. The aliens may orbit around the sun like we do, or maybe they’d take advantage of their low mass and travel throughout the cosmos.

They would draw resources from the sun and from supernovae.

The sun is one of the major sources of neutrinos, as are stars that go 'kaboom' at the end of their life: supernovae. These provide a steady stream of neutrinos with which the aliens can construct whatever they want in their realm. Maybe they make neutrino-based galactic tunnels, or neutrino-based 'ordinary matter’ detectors to spy on us, or even neutrino-cheeseburgers. But constructing these neutrino-objects might be challenging, because neutrinos have a relatively miniscule mass and don’t interact in all 4 force fields - which brings me to my next speculation:

The aliens would be ginormous. And cold.

At the nano/pico scale, all of us - including animals, plants and the earth itself - are made of quarks and electrons mostly held together by the strong nuclear force and the electromagnetic force. Both these forces are very strong and that’s why our building blocks (atoms and molecules) are so tightly packed - the forces pull them very close together and create strong bonds. Since our building blocks are small, we are small too, at least on the cosmic scale.

Neutrinos, on the other hand, only interact with gravity and the weak nuclear force. Hence, they tend to stay far apart from each other and do not create bonds. For there to be a neutrino-based lifeform that is held together by just these two weak forces, and for it to have sufficiently complex biological parts with lots of particles, it would be unfathomably large. Even the neutrino-land equivalent of a single-celled bacteria would be orders of magnitude larger than any human being.

The neutrino-alien would also have to be cold. If it was warm, the neutrinos would zip around much faster (that’s what “warmth" is) and the weak forces would not be able to hold all the neutrinos together. It would shred apart into nothingness. But if it was a cold creature — near absolute zero temperature - its neutrinos would be moving slow enough to be “captured" and held together by the weak forces and its life would be way more chill (sorry).

To these giant, freezing aliens, we could seem as insignificant in size as a virus is to us. So maybe the aliens are not inside us, but we are inside them.

Our perception of the cosmos is a narrow slit in the dark void.

We humans, as a quarter-million-year-old species, have only just come to realize our ignorance of nature in the last few centuries. In that short time, we have made tremendous strides forward in our understanding of our planet and the universe, from gravity to quantum mechanics. But if there’s one thing we’re sure of, it’s that we’ve hardly scratched the surface of all there is to learn and discover. I have hope that our rapid pace of scientific discovery will lead us to find new realms and parallel worlds…and maybe, just maybe, to discover alien life.

Acknowledgments: this piece was probably subconsciously inspired by one of my favourite books - Three Body Problem by Cixin Liu - which describes in detail a very interesting alien lifeform and the advanced civilization and culture they build. I would also like to thank these wonderful humans for reviewing my draft and giving me feedback: Nabeela Merchant, Jeff Emmanuel, Tze Ren Tang and Natalie Plociennik.

P.S. if you have a physics background and this made you cringe multiple times due to inaccuracies, please chat with me about it! I’d love to hear your rants so I can better understand the subject and maybe write a ‘harder’ sci-fi piece next time.

P.P.S. if you think this thought experiment is whacky and highly improbable, you are probably right! I invite you to imagine what kind of worlds and creatures may exist if they were made of different particles or micro-structures than we are. There’s probably a better building block than neutrinos for making intelligent life out of. 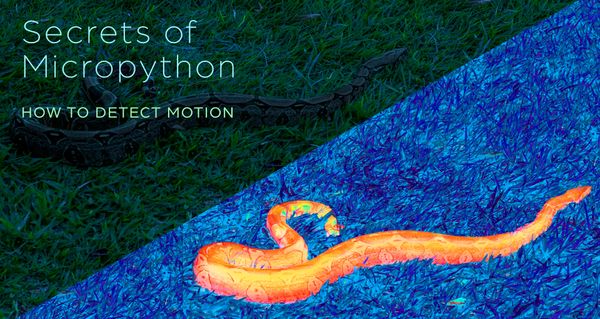 We rely a lot on our eyesight to detect movement in our environment. But smart light-switches are able to detect your movement in a pitch dark hallway and turn on the lights for you. How do they do that? Today we'll learn how, and even build our own smart light using MicroPython! 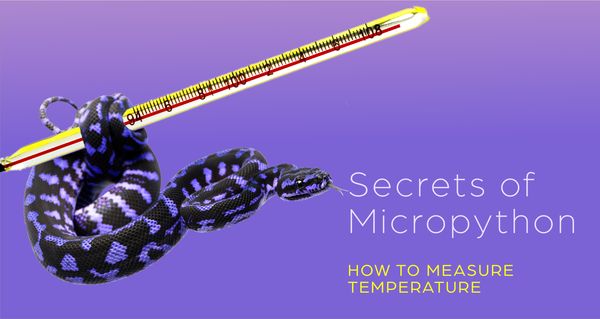 Whether you want to check for a fever, monitor the conditions in a greenhouse or protect your satellite in the freezing cold of outer space, you need to measure the temperature of your system. But have you ever wondered how a digital thermometer actually works?

Knobs are a universal way of controlling devices - you use them on stoves to control the temperature, on speakers to control the volume, and on Russian spacecraft to control...space stuff. But have you ever wondered how they work?